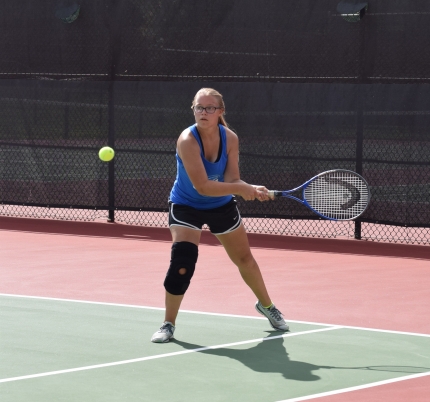 WHS tennis ended the season at a difficult regional tournament Friday at Hesston.

The Chargers highest seeded player, junior Autymn Schreiner, fell just short of a state appearance. Schreiner was seeded number six at regionals and her first match was against Ashten Halls from Sabetha. Schreiner defeated Halls with a score of 9-1 and moved on to the second round. Schreiner then played Halle Krehbiel from Hesston and lost 6-0, 6-1, putting her in the consolation bracket. Schreiner then played Isabella Matteucci from Sacred Heart to determine who would go to state. She won her first set 6-3, but lost her second set 7-5, and lost in a super tiebreaker 10-5. Schreiner finished her second year with a 23-10 record.

“She had a really great season, so it’s disappointing to end with such a tough match,” coach Brendan Praeger said. “She improved every part of her game over the course of the season, so she should be in a great position to compete for a spot at state next year.”

Sophomore Lily Ogden also finished her second season with with a fall to Matteucci. Ogden entered the day as the ten seed played seven seed Matteucci in her first round, losing 9-2. Ogden ended the season with a 16-15 record.

Seniors Kylie Evans and Kinsey Stuewe entered the tournament being the number 23 seed due to a random draw. Evans and Stuewe battled against Bernhardt and Isaac from Hillsboro, losing 9-6. Evans and Stuewe ended their final season with a record of 12-13 together.

“The seeding was particularly tough at this regional,” Praeger said. “The seventh-seeded doubles team was undefeated, and everyone in the top-11 went to state last year, so we knew at the beginning of the day we would have a hard path.”

Seeded number 13, sophomores Kendyl Bolinder and Raegan Feyh played the 19 seed Bernhardt and Plenert from Hillsboro. Bolinder and Feyh won the play in game 9-4, moving them into the first round were they played the four seed Hubbard and Unruh from Heston. They lost 9-0 ending their season with a 16-16 record together.

As a team WHS won two regular season meets this year at Wamego and Clay Center, along with bringing home medals from most meets. “I think this is one of the best years for us,” Schreiner said. “We won a couple of meets and all improved. Personally I got a lot smarter at knowing what to do with the ball.”