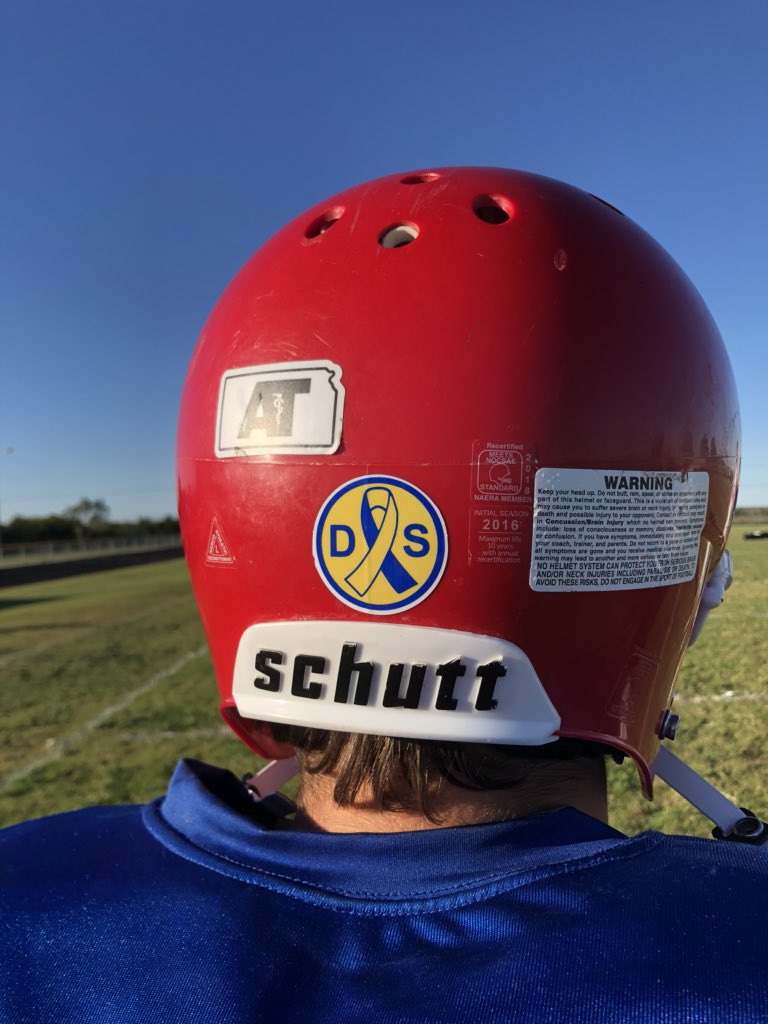 Charger football helmets sports a “DS” sticker to raise awareness of Down syndrome.

Football, volleyball look to educate public about disabilities and diseases

Every October, the volleyball teams hosts a “Pink Out” game, hoping to spread awareness about breast cancer. “Pink Out” shirts are designed and sold in the fall. Proceeds are donated to help patients battling breast cancer. The team suits up in pink uniforms, and encourages the crowd to come decked out in pink to cheer them on. This year’s theme is “Fight like a Girl.” The game takes place today. The basketball team also participates in spreading awareness with a “Pink Out” game in the winter. This tradition has been carried on at Wabaunsee for several years.

The football team is wearing stickers with the blue and yellow Down Syndrome Awareness ribbon and letters “DS.”

The program first started when Chad Simon, a parent of a child with down syndrome in Northwest Kansas, contacted several football teams in the state, asking them to wear these stickers on their helmets through the month of October.

SueAnn Wanklyn, a para at the high school, approached coach Rutledge about participating in spreading awareness. Wanklyn’s son, Cody, a senior on the Wamego High School football team, has Down syndrome. She hopes this will help spread the message that, with help and acceptance, anyone can accomplish anything if given the opportunity. Cody has played six years of football, including four years of high school football. This year will be his tenth season of wrestling, lettering his sophomore and junior years. He’s also participated in junior high track, high school baseball, golf, powerlifting, horse club, swim team and Special Olympic sports.

“We do not let Down syndrome get in his way of doing what he wants. Sometimes mom has to do some leg work to make it happen. Sometimes the organizations take control and pave the way,” she said.

Coach Rutledge briefly spoke with the boys about how what they are doing is about much more than just a sticker. He encouraged them to think about those who don’t have the same opportunities as they do in life, school, jobs, ect., because of disabilities like Down syndrome. He also spoke with them about the use of the word “retarded” as a derogatory term, and how it mocks those who did not choose, but were born with a disability.

“It’s important to give them our respect. It’s like having a part of them out there with us,” sophomore Dawson Schultz said.