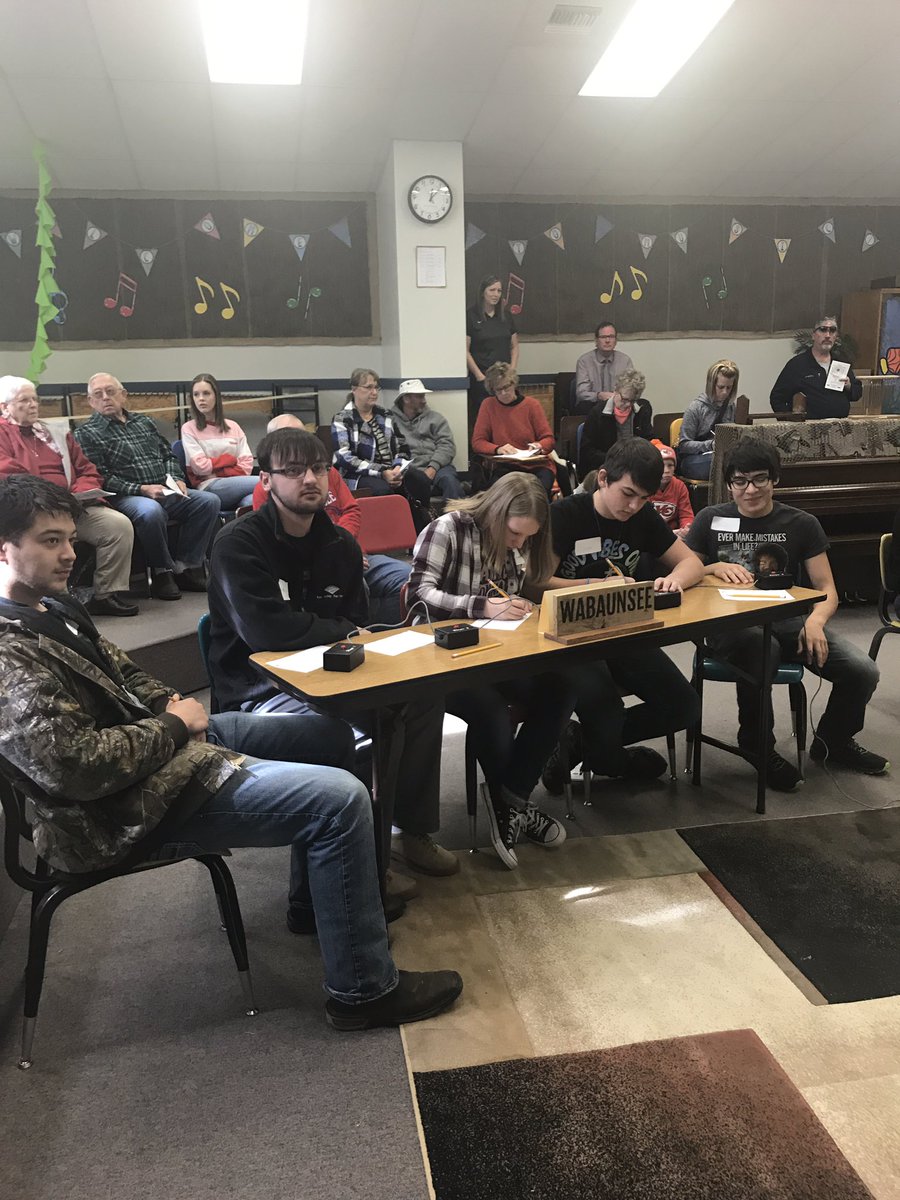 The Wabaunsee Scholars Bowl team ended its season with a 5th place finish at state.

Seniors Maddie Alderman, Luke Barber, Jarrett Bolinder, Sean Dugger, Dillon Spellman and junior Eleanor Badeker traveled to Inman Elementary School to compete in the state meet after qualifying by placing 2nd in the regional meet. The state meet would be tough as it included eleven other teams who placed in the top three from other regional scholar bowl meets including teams like Wichita Independent and Goessel.

“I felt excited and much more nervous than I ever had,” Spellman said.

The format of the state meet is similar to the format used by the regional tournaments. The teams were separated into two pools and the teams competed in a round-robin with the top three teams from each pool moving on to the championship rounds.

WHS won its first four matches of the tournament against Syracuse, Sacred Heart, Oswego and Sublette. The last round of pool play would be against the other undefeated team in the pool, Wichita Independent.

The Chargers gained a lead in the first few questions but would be overtaken quickly after Independent correctly answered nine consecutive questions. Independent won 30-95. WHS would move on to the finals with a 2nd place finish in pool play.

“It felt good to go to the finals,” Spellman said. “But getting destroyed in that final match was very discouraging.”

The championship rounds began with a match against Sublette, a team that got 3rd in the same pool. A tough set of questions would result in a very close round with only a 10 point difference. WHS took a first-round loss of 20-30.

The next match would be against Heritage Christian Academy, a team who placed 3rd at the Wabaunsee regional. Once again, a tough set of questions would produce a 20-point difference, but another loss with a score of 20-40.

A rematch Wichita Independent would be the next match and would prove to be a difficult with Independent interrupting most of the questions. Another loss with a score of 20-100 would put the team in a poor spot for placing.

“When we lost three and still had one of the top teams to play, the mindset changed to get at least one win,” Alderman said.

Northern Heights, the champion of the Wabaunsee regional, was the next team up. The questions in the round may have been difficult, but WHS would overcome the challenge to gain its first victory, 40-10. Another win would make it possible for a top four finish. The last match of the meet would be against Goessel, first place of the other pool during pool play. WHS would fight hard but would prove to be tough a result in a loss with a score of 40-70.

“I thought we tried our best but it was disappointing coming up short,” Bolinder said.

A 5th place finish is one of the many accomplishments the team gained throughout the year. WHS finished second at Council Grove, league and regionals as well as coming very close to entering in the final rounds in two meets. Alderman would lead the team through the year as captain, scoring 1650 points. Spellman scored 755 points, Barber scored 160 points, Bolinder and Dugger scored 100 points each and senior Jessica Vanstory got 10 points.

“I knew this would be a strong team because we returned so many talented players from last year. I think they were really driven and competitive. We were only a couple of questions away from a better finish against some of the best teams in the state,” scholars bowl coach Brendan Praeger said.