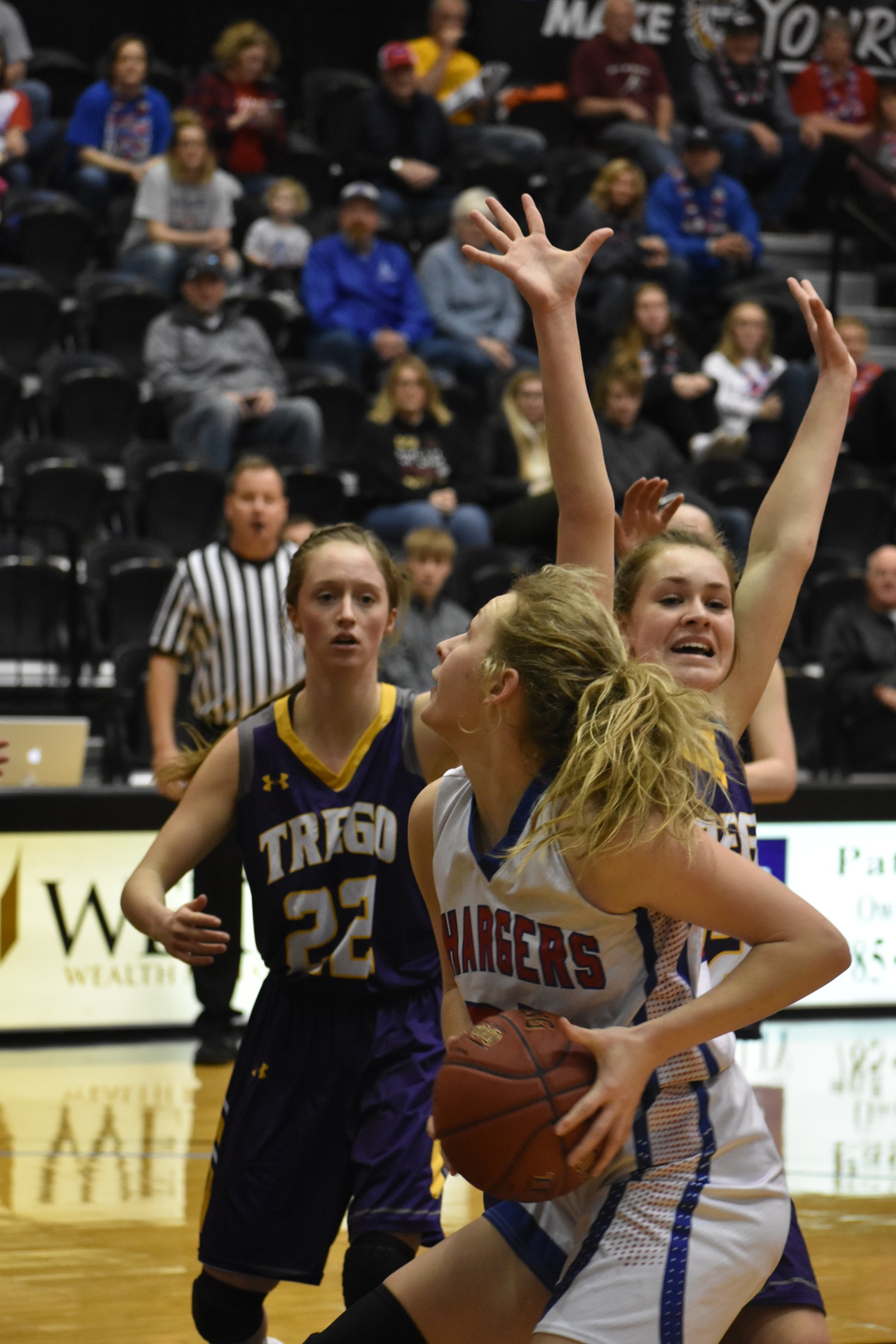 Senior Abby Oliver goes to the basket during the 3rd place game against Trego Community High School. Oliver was named All MEL 1st Team, Capital Journal 2A All-State 1st Team, Sports in KS 2A All-Tournament Team and Sports in KS 2A Player of the Year. Photo by Sarah Vanstory.

The girls basketball team ended the season with a third place finish in the state tournament and a record of 22-4.

The Chargers entered the state tournament seeded number one and for the first round they played the eight seed, Heritage Christian Academy. WHS rolled to a 91-42 victory and moved to the semifinals.

“The first game, we came out and just played basketball like we know how. Unbreakable defense and fast breaks,” senior Abby Oliver said.

In the semifinals, the Chargers had a tough match up to four seed, Garden Plains. The girls came short of making it to the finals after losing a heartbreaker in overtime, 55-51.

After losing in the semifinals, the girls competed against Trego Community, the second seed, for third place. The Chargers were able to pull it through for the third place finish in the state with a final score of 49-36.

“The third game, I think was a rough start because it really wasn’t where we wanted to be playing, but we pulled it together the second half and brought home third place,” Oliver said.

The team was disappointed about not getting to play for the state championship, but was happy to end the season with a win.

“We worked hard at state and came up short, but I am just thankful we could end our season with a win and could leave (coach) Perine on a win,” junior Madelyn Hutley said.

The team supported each other throughout the entire season to get them to the state tournament.

“What made this season special is the whole year we worked together playing as a team. No one played just for themselves. We all had each other’s backs,” Oliver said.

The team finished the season with a winning record, a third place state finish, first place in the Royal Valley Tournament and second place in the Wabaunsee Invitational Tournament along with several players receiving awards.

The team looks to compete again next year, although it will lose seniors Abby Oliver and Alyssa Lohmeyer. The team will also be losing head coach Shanna Perine.

“This season was special because it was our last season with Perine and I’m  gonna miss Abby so much and I know she will do great at Washburn,” Hutley said.

The Wabaunsee wrestling team faced a sorrow-filled end at the regional tournament as no wrestlers qualified for state.

Despite the forecasted snow and the cancellation of school, the charger wrestling team traveled to Rossville to compete in the Regional tournament February 15 and 16. Individuals would wrestle through a bracket where two losses would end a season while a finish in the top four would grant a trip to compete in the 3-2-1A State Wrestling Tournament. Even though five wrestlers would be competing with no high school state experience among them, the team still hoped to do well in the competition.

“I felt pretty good and we had a shot in multiple weight classes,” head wrestling coach Joey Heersche said.

The team would wrestle hard and only freshman Marek Boatwright would have his season cut short at the end of the first day. Sophomore Eli Mumpower wrestled to the semifinals where a win would put him in the championship match, but lost by pin and would wrestle through the backside with another chance at state.

Senior Sean Dugger was the first match of the second day. A close match that finished in overtime, a loss ended his season and high school career. Sophomore Derek Wallin looked to come back after a tough loss in the quarterfinals, but met a tough opponent who put an end to his state bid and season. Freshman Koby Corp would be the next Charger on the mat. A match ending in a pin would signal the end of his season. Mumpower would once again be a match away from a trip to state. He pulled ahead in the first period by points, but his opponent came back and put Mumpower on his back to end season.

“It hurt to lose again,” Mumpower said. “I hope to make it next year.”

The team looked to rebuild after the graduation of two state champions and hoped to send multiple wrestlers to the state tournament. Despite having no state appearances this year, the team still looks forward to next year and the years ahead.

Despite a disappointing end, coach Joey Heerche is optimistic for the program’s future. “I feel like the immediate future is looking good, but the long-term is looking great with 60 club members, many of them returning from a previous season,” he said.

The team will graduate two seniors at the end of the year, Austen Bonnette and Sean Dugger.

“It has a lot of fun and such a huge learning experience,” Dugger said. “I had hopes to make my last season last a week longer than it did, but a bracket with seven previous state qualifiers made it very difficult.”

The Charger boys basketball ended its season in sub-state with a 78-64 loss to Hillsboro.

Although the team was disappointed in the final record of 5-16, the team stayed competitive throughout the season, with five of the losses by single digits.

“It was definitely a building year. We got a new coach and we tried some new things. The highlight was winning the Wabaunsee Invitational,” junior Keaton Johnson said.