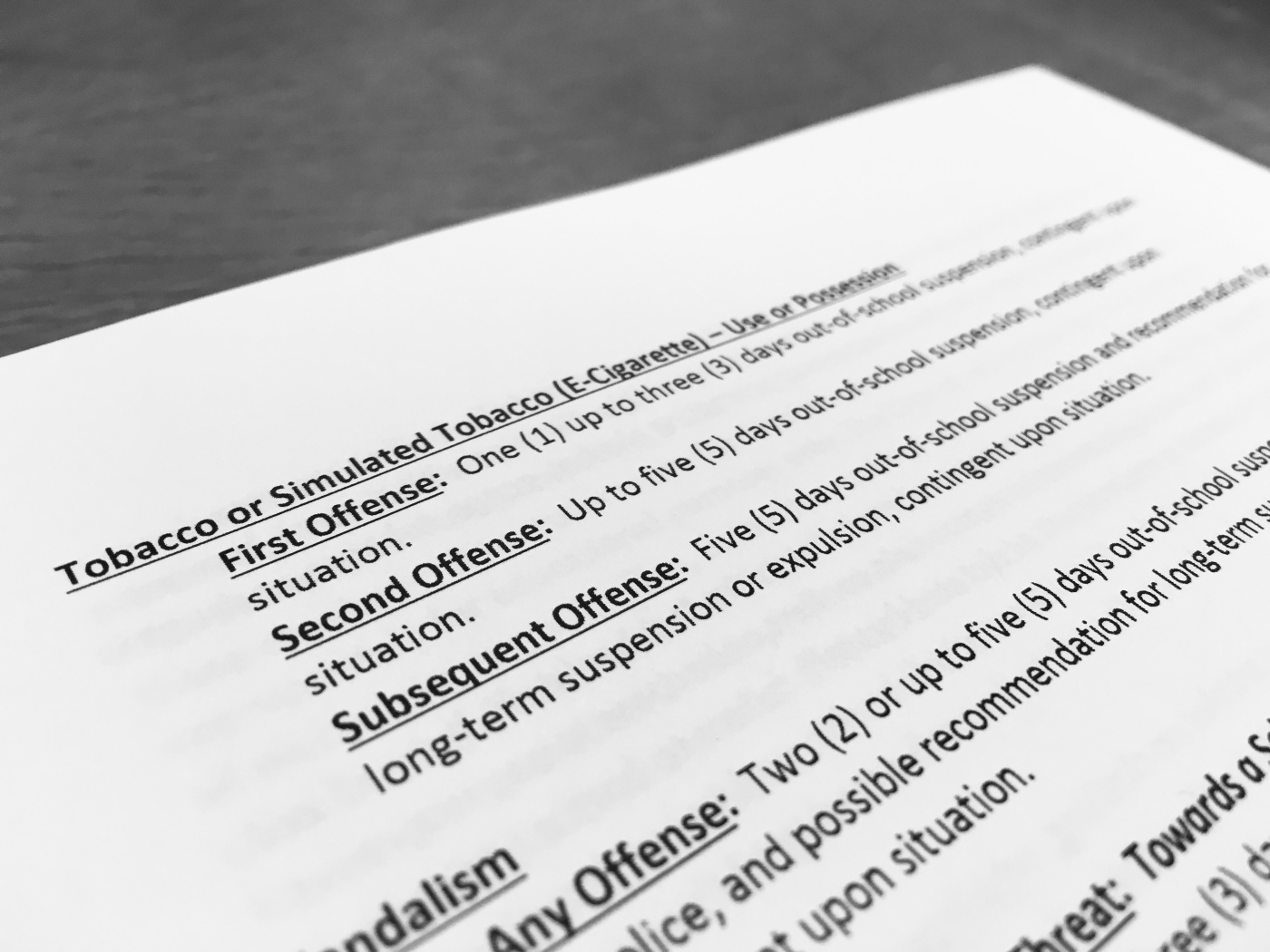 It’s not cool to juul in school

After e-cigarette use became a widespread issue last year, which seemed to catch administrators, teachers and parents off guard, WHS worked to combat it by educating students about risks and clarifying the tobacco policy in the student handbook to include e-cigarettes.

Possessing any type of electronic cigarette device is illegal on school grounds. The policy for use or possession of any tobacco or simulated tobacco (E-cigarette) product, as stated in the WHS handbook, for the first offense is one to three days of out-of-school suspension, contingent upon situation.

Despite the administration’s best efforts, vaping is still a problem in our school this year. Policies such as limiting locker room time at the end of P.E. classes, allowing one person in the bathroom at a time per class and increased surveillance of students are being enforced.

Some of these policies are unfair, and the entire student body should not face consequences due to the actions of a few people. Students in fitness classes are concerned about having enough time to shower, change and get ready to go to their next class. Limiting bathroom time causes difficulties as well, as shortened passing periods make visits more difficult already.

We believe the staff is doing the best it can, but some of these policies cause a huge inconvenience to everyone while doing little to actually stop students from vaping at school.

Punishments can also affect sports and activities. Each sport at WHS has its own policy regarding alcohol and tobacco use and the consequences for violating these policies. Many of them include suspension from a meet or game followed by dismissal from the team with any further violations.

The Kansas State High School Activities Association has no policy about vaping, but has encouraged high schools in the state to adopt their own policies and bring awareness to the issue. The KSHSAA Code of Conduct for athletes prohibits the use of tobacco during an event, but leaves it up to schools to determine punishment for use outside of competition.

So the question arises, what is the proper procedure for dealing with this issue?

First, it would be easier on the school as a whole if all sports and activities at WHS had consistent policies regarding vaping and e-cigarettes, as well as alcohol and drugs. This would clear up any confusion as to the proper procedure of dealing with any violation of policies, and would also be more fair to all students because the punishment would be the same across the board. Coaches are currently enforcing their own policies, and we don’t doubt that they would enforce a school policy fairly.

Despite our opinion of school policies, the real responsibility lies in the student body. People under the age of 18 should not vape because it is illegal to possess or use any type of electronic cigarette. It is not cool, does not make you cool and is so unimaginably unhealthy for you that it just is not worth it.

If you see students using e-cigarettes in school, tell them to stop, and report them to a teacher or administrator. If the school has reason to believe a student is vaping, they should investigate, which includes searching their bags and lockers. It’s important for punishment and consequences to be consistent for all students.

We understand that teenagers sometimes make dumb decisions, but at the very least, we wish they wouldn’t make them at school.

The editorial is the opinion of the Charger staff. Send letters to the editor to whscharger@gmail.com.