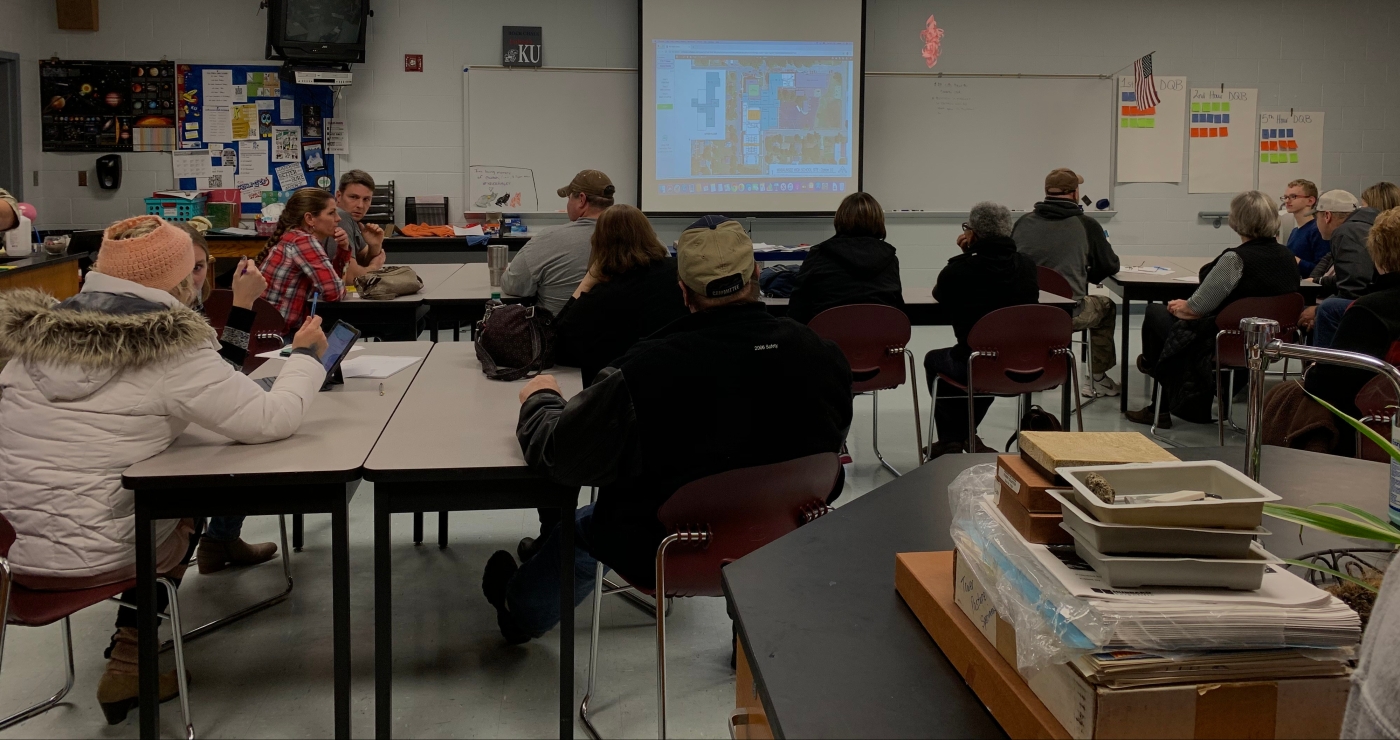 The USD 329 Board of Education held a town hall meeting Tuesday to discuss the bond options.

The meeting format involved splitting attendees into three groups with board members spread throughout to allow for more opinions to be heard.

Board members Jim Vopata and Callie Meinhardt presented option 10, which includes closing all buildings in the district and constructing a Pre K-12 building. Vopata explained that although the bond says all closed buildings would be demolished, selling them is also an option and they wouldn’t necessarily be demolished.

Concerns for the placement of the proposed new school in Alma were brought up by community members. Vopata and Meinhardt explained that everything involving location and the layout of the building is still up in the air.The plans presented by HTK Architects are mainly for a general idea construction options. The architects have created plans for other schools in the Linn and Emporia areas successfully. HTK was hired with information collected by superintendent Brad Starnes comparing several architects in the area. Along with location, price is only a rough estimate and is not entirely figured at this time.

A large part of the architects findings concerned wasted space. The district is 100,000 square feet over what is needed to provide adequately for the number of students enrolled in the district. This bond solves this problem and would ultimately save $45,000 a year for the district that is spent on upkeep for unneeded square footage.

Justin Frank and Donald Frank presented option 12, which includes closing both Maple Hill Elementary and Paxico Middle School and repairing the remaining buildings. “Operating budget, safety and security are our main goals,” Justin Frank said. Continuing with this bond would only remove 40,000 of the 100,000 extra square footage that the district maintains.

This option is not a permanent fix for many of the problems in district buildings, and those same concerns would need addressed again in the next 20 years. Several community members also voiced their concern over the possible destruction of the old high school building, as it is nearing 100 years old. HTK architect Keith Blackburn explained that doing so would be an endless expense to keep the building running.

“Buildings like Hale library cost roughly $114 million to renovate with the whole state being taxed. We only have one community to fund this,” Blackburn said. WHS is currently up to the safety standards for the fire marshall, but if renovations began it would only cost more money in the long run to keep up with the safety standards.

Community member Matt Moser raised concerns about losing students and funding by shutting down Maple Hill and Paxico schools. Board members explained that after speaking to several schools in the area that had switched to a Pre K-12 building about losing students, and they came up with the figure of roughly a 25-student loss. Many schools said that while some families swore to take their kids out of the district if these changes happened, many decided to stick it out and try the new district layout. Potential losses have already been figured in to the proposed plans.

Option 16 was the final option, presented in depth by board members Jerome Hess and Tony Conrad. Option 16 includes closing both the middle school and Maple Hill Elementary, along with demolishing the old junior high building. Wabaunsee Elementary School would be placed on the current junior high location.

Conrad explained to community members that it is not economical to continue paying what we do to keep unused space up and running in our district’s schools. “Mission Valley pays (for propane) for their entire school what we pay for only one of our buildings,” Conrad said.

WHS teacher Brandi Miller shared her opinions on having a more condensed district. Miller hopes that bringing teachers closer together would eventually help to form a stronger curriculum and better learning environment for students. “Collaboration is essential for teachers,” Miller said.

Every option includes demolition of modulars. In total, the district has six modulars, one of which is not currently in use due to black mold. By demolishing modulars, the district hopes to take care of some of the extra square footage in the district and create a safer environment for students. This would involve less time spent outside traveling between classes.

Board members will meet Monday, February 10 and facilities will be an action item on the agenda. They hope to find the most efficient option that will provide the best education for USD 329 students. This meeting will be the last opportunity if the BOE wants to have a special election prior to the November general election. The special election would be in May.

Superintendent Brad Starnes said the meeting was beneficial. “I think it allowed BOE members the opportunity to dialogue with the patrons, hopefully answer some questions and help both the BOE and patrons in understanding how to solve our problems.”