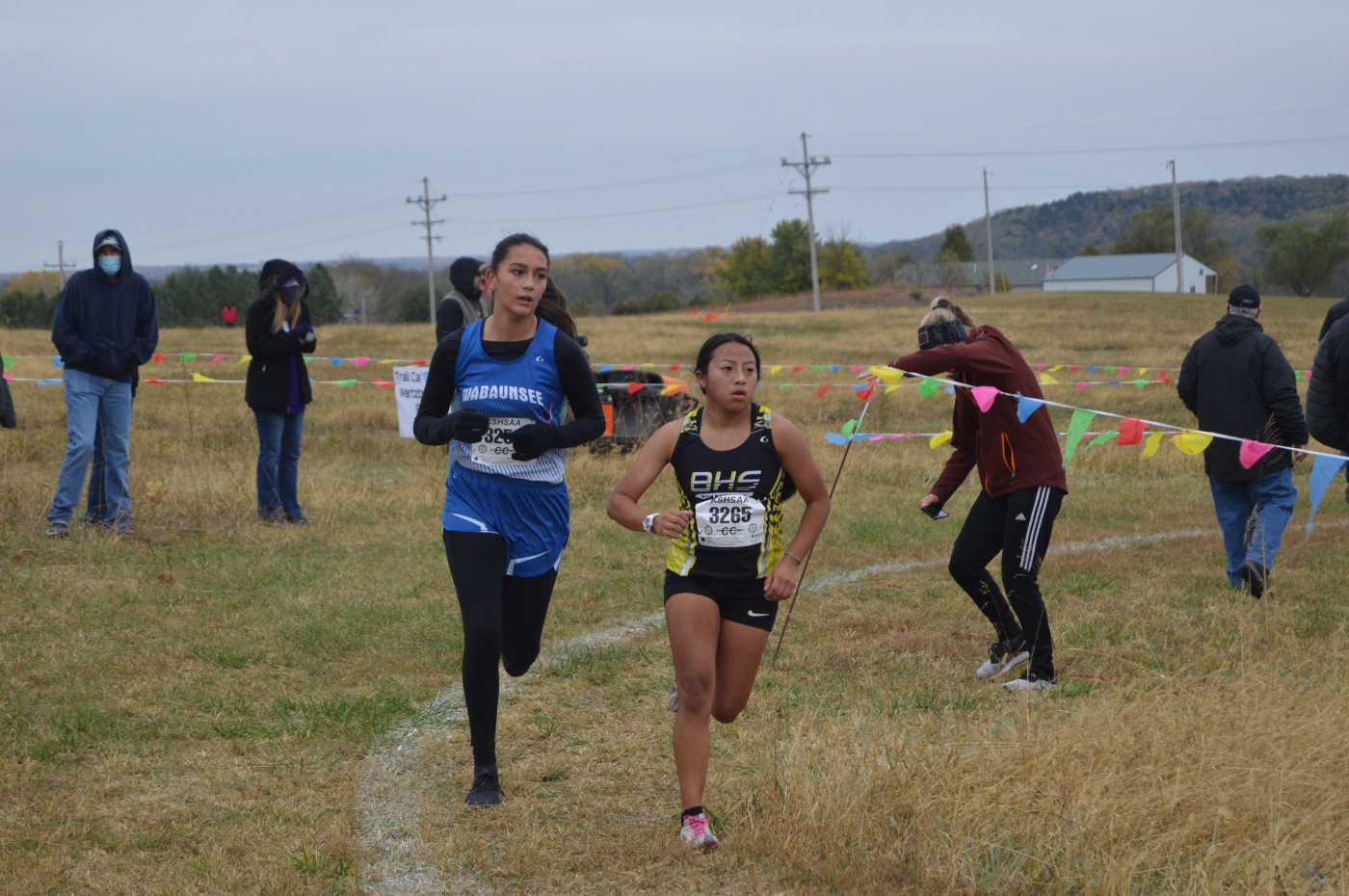 The cross country team hosted its regional meet Saturday, with two runners qualifying for the state championship. Sophomore Rebekah Stuhlsatz came in second in the girls race with a time of 21:46. Freshman Sienna Jones had an eighth place finish, with a time of 23:09 seconds.

Stuhlsatz says it’s disappointing that the rest of the team won’t get to compete at state alongside her, but she’s excited nonetheless.

“The rest of the season was good for our team. I think we did good for the meets that we got to go to,” she said. Stuhlsatz returns to state after an 11th-place finish her freshman season.

Jones didn’t secure her spot until the very end of Saturday’s race.

“We were all in a group and they pulled away during the race. About 100 meters from the finish line I sprinted past all of them,” Jones said. “Everyone was yelling that I was in 11th. The girl in 10th kept speeding up and slowing down. She passed me on and off. When I finally passed her for good I passed a few other people as well.” Jones said.

Jones said she improved a lot throughout her freshman season, and is excited to qualify for state. “I thought if I was going to go to state it would be as a team, not individually, so there’s a lot of pressure now,” she said.

The girls team fell just short of a spot at state, with a 3rd place team finish. For the rest of the runners, their season came to an end Saturday, including senior Kimi Buchanan.

“Our girls team came within 4 points of qualifying for State and within 5 points the first place team from Sacred Heart,” coach Roger Alderman said. “Just two weeks ago Sacred Heart had beaten us by 75 points at the Riley County meet.  Since then we have really been coming on strong and continued that trend by improving by an average of 1:03 from our times last week on this same course.  The two teams that beat us today, Bennington and Sacred Heart, came into the meet ranked #4 and #6 in the State and we gave them a run for their money.”

The boys team ended its season with a 7th place finish, and was unable to qualify any runners individually. “Our boys team has suffered a lot of bad luck with injuries this year, but kept battling throughout. Before the season we had hoped to return five of the seven runners from last year’s State Qualifying Team, but in the end only Eli Mumpower was able to run for us at Regionals, and we ran four freshmen at (Saturday’s) meet,” Alderman said.

Mumpower ended his senior season with a 14th place finish “Eli put himself in the hunt to qualify for State individually, but in the end came up 20 seconds short.  Overall the boys improved by an average of about 30 seconds from last week’s race.  We had lots of boys gain some varsity experience for us this year, and that will pay off down the line,” Alderman said.

In addition to Mumpower, the team graduates Isaac Lira and Peter Stuhlsatz.

The Chargers run for the final time this season 10:05 a.m. Saturday at Sand Plum Nature Trail in Victoria.