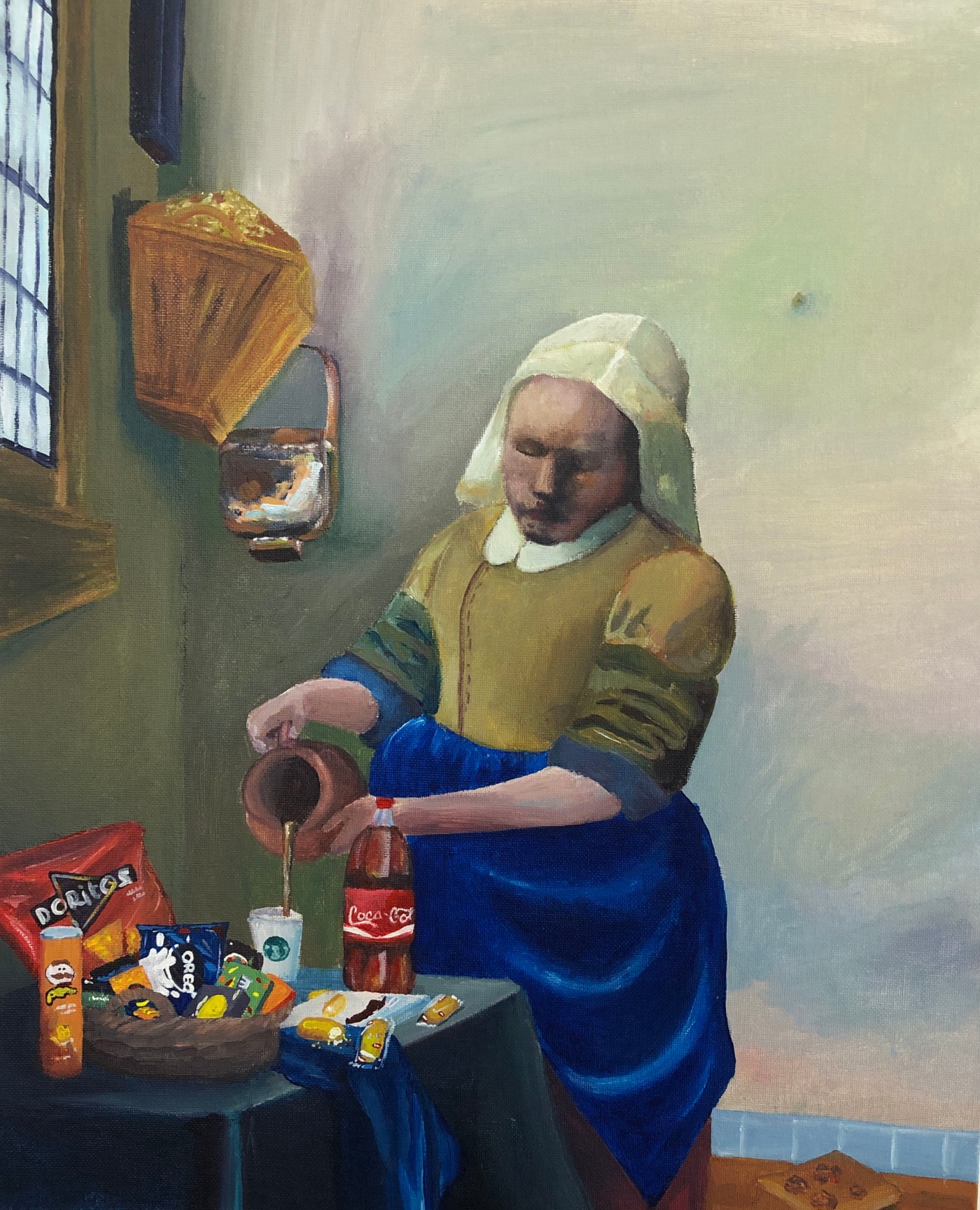 “Common Foods” by Ryan Grutsch recreates “The Milkmaid” in acrylic paints. Grutsch replaces common foods in the original with foods from our era. “It shows how bright, fake and unhealthy the foods we eat nowadays are,” Grutsch wrote. “This is the first painting I’ve painted that can have a real meaning taken away from the piece. The thing I most pride myself on with this painting is that I never used black paint. I mixed every color using just the primary colors, and I hope to do many more paintings like this in the future.”

Junior Natalie Degand used watercolors and black pen to create her work. My artwork describes two statues looking down at broken pieces that are left lying on the floor,” Degand wrote. “It expresses two people who are stuck in a toxic relationship and neither of them want to leave it.”

“Something that I hope to remember about this lesson is that it’s OK to step out of your comfort zone in order to do something you are scared of doing because that is the only way to get better at something.”

In “War Paint,” senior Bri DeVader created a black and white pastiche of Marilyn Monroe and her sister Morgan. “Marylin has always been a body-positive and absolutely stunning idol of mine for a very long time. I chose Morgan for my pastiche because if I were to choose a realistic idol in today’s time it would be my sister.

The title comes from the idea that putting on makeup is like war paint. “We put makeup on ourselves to feel even more powerful than we already are,” DeVader said.

In “Abraham Alderman” sophomore Robert Potter put math teacher Roger Alderman’s face on al old portrait of president Lincoln. “Drawing a teacher was challenging, since Mr. Alderman checked in on my work and I wanted to make it look good,” Potter wrote.

Sophomore Allyson Garst put Miss Piggy on the Mona Lisa. “I was trying to get out that there were not many differences in the ladies,” Garst wrote. “They are both well-known and privileged and I thought they were very alike.”

Senior Lily Ogden put actor Ryan Reynolds on an image of artist Vincent Van Gough. “It wasn’t easy. I had to be able to create shadows from Van Gough’s body and Ryan Reynold’s head onto the canvas,” Ogden said.