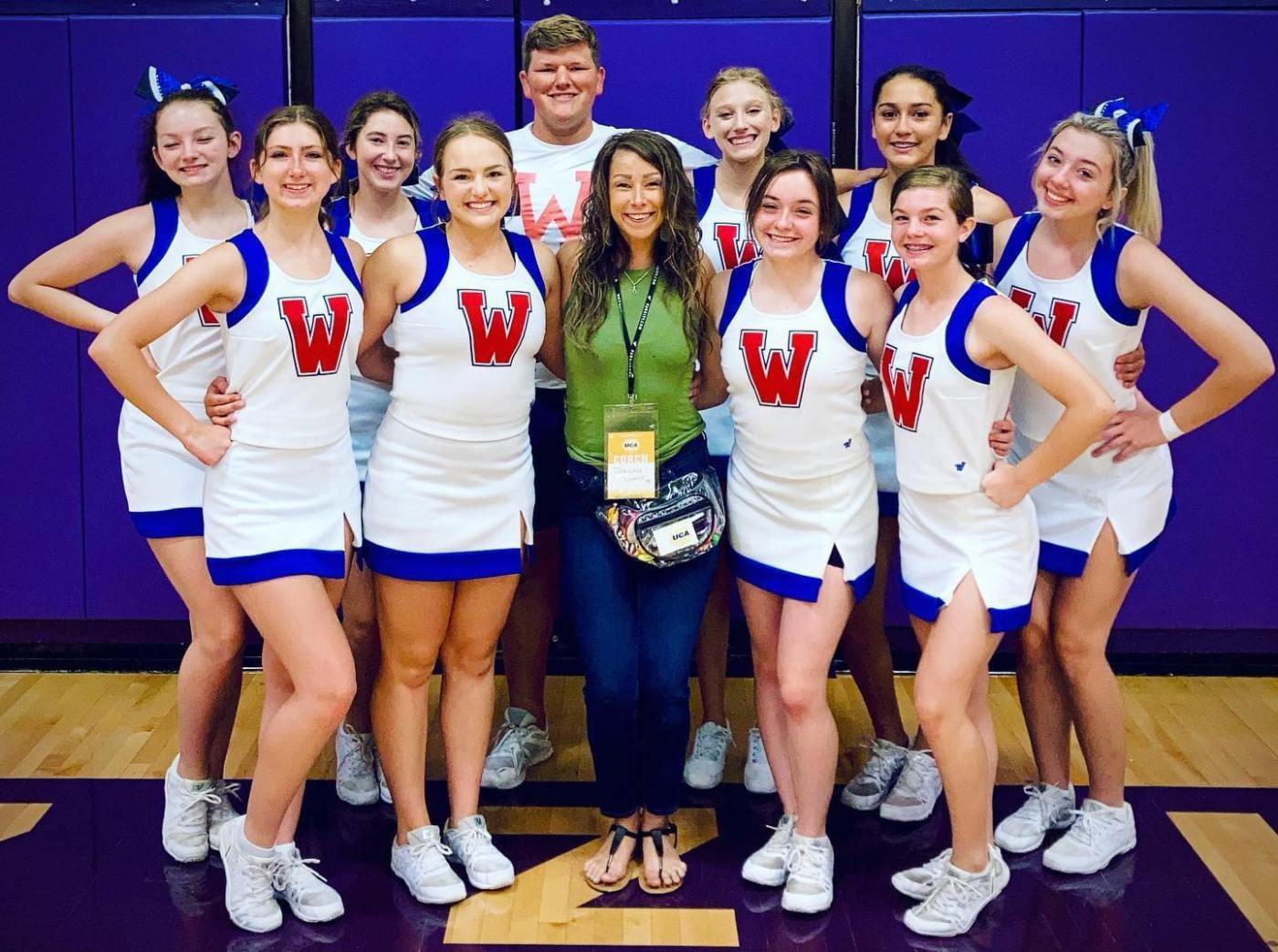 New cheer coach Jordan Dunn is trying to get her bearings before making any changes.

“I’m just trying to overcome the learning curve of being new and becoming familiar with what’s already been in place,” Dunn said.

Dunn has lots of praise for the team, and sees cheer as a big honor for the squad. “We are both grateful, and honored, to represent the Wabaunsee school district and it’s community. We recognize the responsibility of our uniform, and wear our Charger colors with pride and integrity. We value sportsmanship and teamwork, knowing that our attitude, effort, and actions are what we ultimately leave behind in our character and our legacy. On behalf of the 21-22 WHS Cheer Squad, thank you to all who have demonstrated their support and we look forward to cheering for our athletes as they compete this year.”

What’s your favorite part about being a cheer coach?

“My favorite part about being a cheer coach, so far, is getting to witness and further develop the raw talent and natural abilities of the individuals on the team. This was especially true at cheer camp. If you’ve never witnessed a UCA or UDA camp before, it is an eye opening experience to say the least. It is four days of non-stop, grueling activity, and I was in complete awe of my team’s mental steadfastness, their refusal to give in to the fatigue their bodies were feeling, and their collective determination to embrace the opportunity we had to learn from some of the best trainers in the nation. It was impressive, commendable, and earned them my respect and appreciation.”

What led to you becoming a coach at WHS?

“I had been offered a position as the district’s Pre-K – 8 school counselor in May, and the coaching position came about a few weeks later.”

What qualifications do you need to have a job like yours?

“I think it depends on the school. Every coach has to receive CPR certification, and I’ve had the chance to attend a couple of additional cheer-specific training through UCA and KSHSAA. Aside from that, it’s mostly just experience and leadership ability. I wasn’t a cheerleader, but I was formally trained in dance. I danced for 12 years in a private studio. There, we focused on formal instruction and spent our time learning tap, jazz, and ballet. As I grew older, I went out for my high school drill team all four years, and was made captain my senior year. My final stretch as a dancer was actually the four years I worked for Texas Roadhouse during my undergrad program. The only area of cheer that I feel ill-equipped to coach is stunting, but I’m learning!”

Where do you see yourself in five years?

“Not to be boring, but I’d honestly like to be in a similar place that I am now (plus or minus a new hobby or venture). I already love both of the roles that I’ve taken on for Wabaunsee, and don’t see myself going anywhere else in the next 5-10 years unless something major took place.”

“Ooo, fun question! Probably the long necked kind. I loved ‘The Land Before Time’ movies growing up, so they were always my favorite.”

Are there any major changes you are making to the cheer squad?

“No, nothing major for now. I think it’s smart to get to know the system before making any shifts in its foundation or structure. There may be some in the future but for the moment, I’m just trying to overcome the learning curve of being new and becoming familiar with what’s already been in place.”

Is there anything you dislike about being a cheer coach?

“This isn’t necessarily something that I dislike about being a cheer coach, but it is something that I am less than confident in doing — dishing out constructive, unapologetic tough love when it’s appropriate. It’s not instinctively in my nature and is something that I hope to improve upon in a major way, both personally and professionally this year.”

Students and community members are welcome to participate.