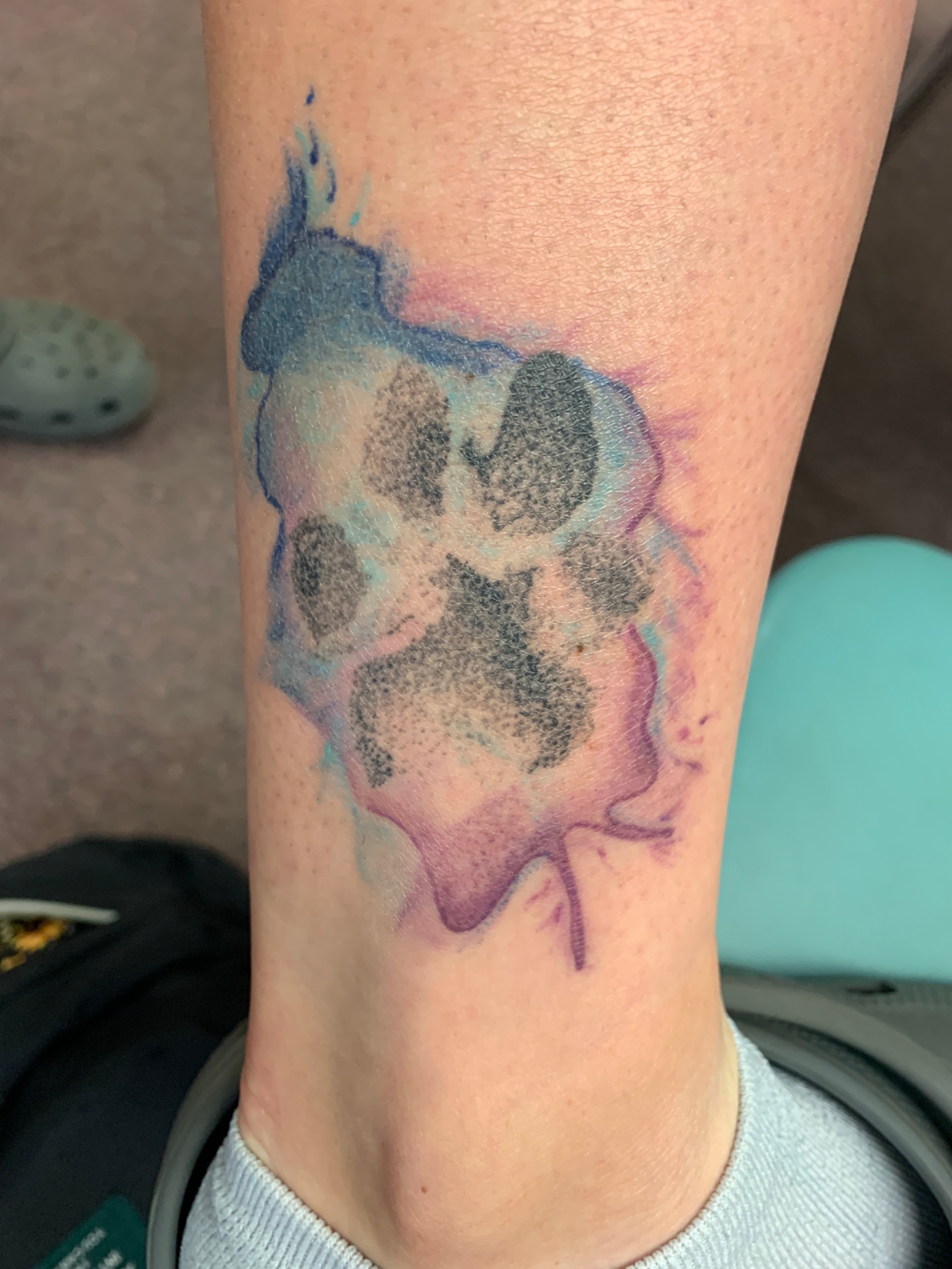 Tattoos are a great way for people to express themselves.

Tattoos have been around for thousands of years. They have grown more in popularity in more recent years. I have always been interested in this form of body art. I have recently gotten three tattoos in the last four months. I have one on my ankle, forearm, and collarbone. Tattoos have a stigma that often comes toward them with jobs. Some believe it gives a bad reputation, but some also believe it gives a new way of self-expression. I believe it allows a form of expression and self-recognition.

My tattoos consist of a paw print, sunflower, and handwriting. My first tattoo was the paw print with a watercolor splash. I got it at Looking Glass Tattoo & Gallery. Before I went to get my tattoo I got a stamp pad and got my dog’s paw print. I got it not too long after my 18th birthday. My second I got a sunflower on my forearm, this time I did a walk-in at Fine Line Tattoo and Piercing.

I went with my cousin Justice Houston. We wanted to get tattoos together before she left to go back to Wichita for College. We both got our favorite flowers, hers being a rose and she put it right behind her ear. Third, I got my great grandma’s handwriting on my collarbone. I did another walk-in. I had been planning to get something of hers tattooed on me, whether it was her favorite things combined or the handwriting. The day before I went to get my tattoo I went over to her house and had her write three different things down to pick from.

Out of the three tattoos I got, the paw print took the longest. Though, my other two are just fine lines. Each tattoo of mine does have a meaning and they turned out amazing.

There are several students and teachers who have tattoos. On their forearms, shoulders, backs, etc.

The earliest evidence of tattoos dates back to around 5,000 BCE or older. Tattoo’s initially were set as cultural practice, as distinguishing individuals in a group. Tattoos began off as symbols, tribal acceptance, religious, mark of status and many other factors. Tattoos began because of scaring, whilst trying to cover or they got stained.

Tattoos had a tumultuous history. They could identify criminals, people were members in which they required respect. The practice of getting tattoos today still reflects those traditions.

Some advice for those who want tattoos. I first would consider getting a tattoo that is meaningful to you. Don’t make it something you’ll regret 10 years from now, make it something that will allow you to reflect on a good memory. Also think about where you’d like to get it placed and how big you’d like your tattoo to get. Best way to think about how big and where to put your tattoo could be based on your pain tolerance. Some parts of the body are more sensitive than others, especially parts where there is more bone.

If you plan to get a tattoo, do some research and see what you like and see what has lots of meaning to you. Don’t judge anyone on their tattoos, they may mean a lot to a person. It expresses a person, and it’s their way of communicating in a form of art.